One of my precepts is to hope for the best and plan for the worst. It’s served me well. Donald Trump’s policies are unclear because of his lies, rapid turnarounds, and obfuscations. The people he is appointing look like the worst is possible, but the American government has a number of ways to slow that down and perhaps stop it. The silence of senators and representatives, both Democrat and Republican, is a bad sign.

People who have studied how nations become dictatorships see many warning signals. Listening to them and taking their advice is part of preparing for the worst. I’ve hesitated to push their material because it is so alarming, but this piece by Masha Gessen and a talk by Timothy Snyder convinced me that I should write this post. END_OF_DOCUMENT_TOKEN_TO_BE_REPLACED

The enormous containment built to house the damaged Chernobyl reactor was sucessfully installed today. That link contains a time-lapse video of the arch’s movement from where it was constructed.

The damaged building and reactor are now protected from the elements, and cleanup work can take place inside the containment. Dust from the building had been subject to scattering by the wind.

European Commission statement This is some of the good stuff that the European Union does.

Donald Trump has a number of connections to Russia, both directly and through his staff. None of the connections indicate more than an interest in doing business there and admiration for an autocratic ruler. Some of his staff’s connections, particularly those of Paul Manafort and Carter Page, are more concerning, but still do not indicate political direction from Russia. Both Manafort and Page were dropped from the campaign when their Russia connections became an issue, but Manafort was seen at Trump Tower recently. END_OF_DOCUMENT_TOKEN_TO_BE_REPLACED

END_OF_DOCUMENT_TOKEN_TO_BE_REPLACED

Fidel Castro, who ruled through eleven American presidencies, is dead. The Miami Herald has the definitive (long) obituary. I think it’s a fair assessment; I recall Castro depicted in the United States as a freedom fighter against the landed overlords, and then his turn to Communism and the Soviet Union. As the obit says, we’ll never know if he was a communist all along. All that is vivid to me because my high school hosted a talk on Castro’s 1956 victory, one of my first understandings of international events.  END_OF_DOCUMENT_TOKEN_TO_BE_REPLACED

I read the transcript of the New York Times interview with Donald Trump yesterday. The day before, I had complained on Twitter that what I had seen in Maggie  Haberman‘s live tweet of the interview suggested that nobody had tried to nail down Trump in any of his assertions or non-answers.

It’s taken my brain a full day to recover from that reading. I can see why interviewers might be thrown off in a real-life meeting with someone who talks and acts like this, added to the prestige of being President-elect. But it is their job. I’m an amateur at the reporting thing, but when I interview someone, heck, when I got together with a few people I know to plan out a panel talk recently, I take notes along about topics and questions that might be asked. There was little indication that the Times group had done any of that. END_OF_DOCUMENT_TOKEN_TO_BE_REPLACED

How much of a danger is a Donald Trump presidency to the United States? We simply don’t know. Trump has lied and contradicted himself. A few themes can be derived from what he has said, but he has also praised unpredictability as a virtue. The appointments he has announced so far give no confidence that the worst scenarios envisioned for his presidency won’t be realized. It is possible that his presidency will be merely chaos and division; here is what I consider a better-case scenario. But we must think about the worst-case scenarios, too, because they will be extremely damaging and very difficult to recover from. For that reason, you will see more of them here than the better cases, until I see additional reasons that up their probabilities. END_OF_DOCUMENT_TOKEN_TO_BE_REPLACED

One of the points of competition during the Republican primaries was who could be most vehement in denouncing the nuclear agreement with Iran, the formal title of which is the Joint Comprehensive Plan Of Action (JCPOA). Donald Trump chose to focus on the negotiation aspect, supposedly one of his strong points. It was a bad deal; he would get a much better one, no specifics given. The negotiatiors used the wrong strategy. Presumably he expected something more like this: END_OF_DOCUMENT_TOKEN_TO_BE_REPLACED 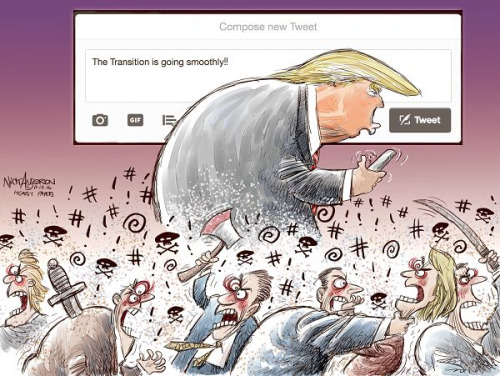 END_OF_DOCUMENT_TOKEN_TO_BE_REPLACED

I’m posting more news and commentary about Donald Trump’s transition team and move toward the presidency. It appears that competence and even ideology have little to do with his choice of advisors; loyalty to him is all. But he has said that he likes to keep people guessing. He chortled in a tweet that only he knows who the “finalists” will be. Government as a game show.