Do you wear a Fitbit?

If you do, satellites may be watching you.

Yesterday, Strava, a social network that collects data from devices with GPS, uploaded a heat map of its users around the world to the internet. Intelligence services are now combing that map for data about hidden military bases and other tidbits. It’s apparently not just fitbits, but mobile phones and a lot of other devices.

The Guardian gives a few examples. A few more after the jump. END_OF_DOCUMENT_TOKEN_TO_BE_REPLACED

END_OF_DOCUMENT_TOKEN_TO_BE_REPLACED

The Hawaii alert was an accident. The dread it inspired wasn’t.

How homicide charges for two skippers will shake up the entire Navy.

Database: the 270 people connected to the Trump-Russia probes.

North Korea’s Goals are Limited: It couldn’t Absorb South Korea even if it Won a War. Best Advice for Policymakers on “Bloody Nose” Strike against North Korea: It’s Illegal.

Europe Must Fight to Preserve the Iran Deal.

Dmitri Trenin has strong words on Russia’s adventure in Ukraine.

U.S. tests nuclear power system to sustain astronauts on Mars. Top photo of the Kilopower system from this article.

Donald Trump has a pattern: take something that is working well – DACA, S-CHIP, JCPOA (the Iran nuclear agreement) – break it just a little, then “negotiate.”

So much of the current crisis atmosphere is due to his love of chaos and his mistaking a protection racket for negotiating.

He broke DACA and set up a six-month timetable for Congress to do something about it. The Republicans in Congress refused to reauthorize S-CHIP.

One of the concessions to the Republicans in Congress in the JCPOA was that the president would have to certify that Iran was in compliance every three months. Trump has used that to call into question the United States participation in the deal. Meanwhile, opponents of the deal are explicitly using Trump’s position as a protection racket to get the Europeans to take steps that would damage the deal. END_OF_DOCUMENT_TOKEN_TO_BE_REPLACED 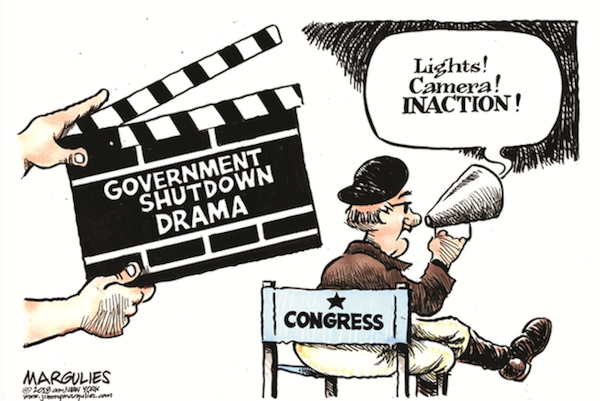 END_OF_DOCUMENT_TOKEN_TO_BE_REPLACED

McClatchy reports today that the FBI is investigating whether the National Rifle Association received money from the Russians during the 2016 presidential campaign. The NRA, of course, backed Donald Trump heavily. I’m going to work through the article in some detail, because it’s hard to get at the bottom line.

The news is that there is an investigation into Alexander Torshin, the deputy governor of Russia’s central bank who is closely connected to Russian President Vladimir Putin. The sources did not say whether there was evidence that the NRA received Russian money. END_OF_DOCUMENT_TOKEN_TO_BE_REPLACED

Estonia’s Justice Minister, Urmas Reinsalu, said early in January that the government could take down the Soviet war memorial at Maarjamäe because it is falling apart and it is not on the official list of historic monuments. This led Prime Minister Jüri Ratas to suggest that the entire area, which includes a German cemetary and a memorial under construction to the victims of Communism, be designated a historic area.

The Soviet Union built many war memorials across its territory, particularly to commemorate World War II, or the Great Patriotic War, as they call it. I find those monuments moving; they are, after all, memorials to people who died in wars and who had families who grieved them. I’ve been to the Maarjamäe memorial a few times. END_OF_DOCUMENT_TOKEN_TO_BE_REPLACED

END_OF_DOCUMENT_TOKEN_TO_BE_REPLACED

For this Martin Luther King weekend, memories of Mississippi in the 1960s. Top photo: The author, Danny Lyon, outside the Student Nonviolent Coordinating Committee headquarters, 1962.

The 100-year capitalist experiment that keeps Appalachia poor, sick, and stuck on coal. This article should be reprinted and quoted everywhere.

Inter-Korean talks are more than just “a good thing”. The myth of a limited strike on North Korea – worse than dumb.

Speaking loudly and carrying a little stick – the myopic US debate on Iran. Why regime change in Iran wouldn’t work.

This is the best summary I’ve seen of the Steele dossier recently.

Would 90 Percent of Americans Really Die from an EMP Attack? NO!

I see that, with Donald Trump’s threats of nuclear war, sales of potassium iodide are up.

A couple of reminders.

Taking potassium iodide can disrupt your physiology, so don’t take it unless the bombs go off. If you want to stockpile it just in case, go ahead, but treat it as medicine and keep it away from kids and pets. Put it in your survival gear, if you have something like that.

And I don’t think we’re going to have a nuclear war. Trump seems to be spinning down from that and moving on to disrupting North America’s economy by pulling out of NAFTA. He’s got a short attention span.