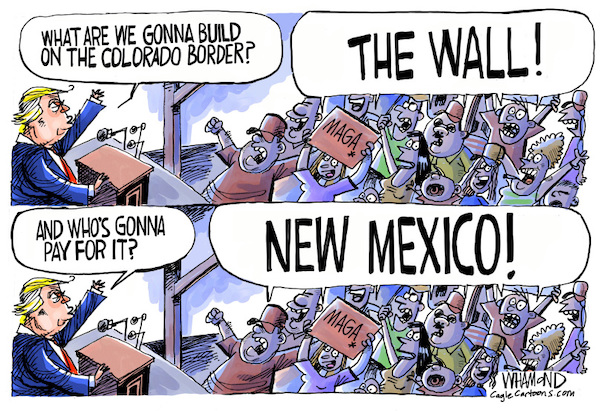 END_OF_DOCUMENT_TOKEN_TO_BE_REPLACED

Every day brings new evidence of Donald Trump’s crimes, or his commiting a new one in front of the television cameras. The scene changes rapidly, but the House Democrats are starting to focus on how to impeach Trump.

Although it is not official, the strategy that has been mentioned is to concentrate on Trump’s abuses of power in his attempts to force the President of Ukraine to comply with his desires to absolve Russia of interference in the 2016 election and to manufacture a scandal against the Bidens that would serve the same purpose as Hillary’s emails. The investigation and current depositions are consistent with this strategy. END_OF_DOCUMENT_TOKEN_TO_BE_REPLACED

That was how David Sanger teased his and William Broad’s article on Twitter.

“Some countries have missiles with nuclear warheads,” Turkey’s president told his ruling party. But the West insists “we can’t have them. This I cannot accept.” ⁦@WilliamJBroad⁩ and I ask: what would it take for Turkey to build the Bomb? https://t.co/1nbR6YOikh via @NYTimes

Unfortunately that is not how the article is written. If you want to read it, write it, they say, so here goes.

In September, Turkey’s President Recep Tayyip Erdogan said “Some countries have missiles with nuclear warheads,” but the West insists “we can’t have them. This, I cannot accept.” END_OF_DOCUMENT_TOKEN_TO_BE_REPLACED

END_OF_DOCUMENT_TOKEN_TO_BE_REPLACED

Three Soviet spies in the Manhattan Project are well known – Klaus Fuchs, David Greenglass, and Ted Hall. Fuchs and Greenglass were known publicly in the 1950s, but Hall’s story came out only in the 1990s.

Now more documents have been declassified, and Harvey Klehr and John Earl Haynes, who have done much to illuminate Soviet spying during that time, have found a fourth Soviet spy. They have found his path from the United States to East Germany and then Russia in 1952, escaping from possible arrest. Their article in the CIA’s “Studies in Intelligence” lays out what is known about him.

The spy’s name is Oscar Seborer. His story intersects with the FBI’s Project SOLO, in which they turned two members of the Communist Party in the USA. Their communications with Moscow seem to indicate that Seborer furnished information on the atomic bomb project, where he was a technician.

Seborer seems to have operated separately from the other spies, and his reporting seems to have been more to the GRU (Soviet military intelligence) than the civilian KGB. The two intelligence agencies have historically competed.

Klehr and Haynes have uncovered a fair bit of information about Seborer’s family, but not much about what he did at Los Alamos or what information he gave to Moscow. Maybe someone reading this knows something about the Seborer family or, as they called themselves in Russia, the Smiths.

The two barges involved in the August radiation accident in the White Sea are being towed to a radioactive waste storage site on the Kola Peninsula. It is not known whether they hold the reactor responsible for the explosion and short burst of radiation measured in Severodvinsk.

The United States government has concluded that the incident was pretty much as has been speculated, a nuclear accident of some sort as a nuclear-powered missile was being recovered. Deputy Assistant Secretary of State Thomas G. DiNanno told a United Nations committee on October 10 that this was the US conclusion, but it was only two sentences.

The United States has determined that the explosion near Nenoksa, Russia, was the result of a nuclear reaction that occurred during the recovery of a Russian nuclear-powered cruise missile. The missile remained on the bed of the White Sea since its failed test early last year, in close proximity to a major population center.

Nothing to indicate what kind of nuclear reaction or how the United States knows this. The news is that they believe the failed test was in early 2018. The nuclear reaction was most likely a criticality incident, but we still don’t know enough about the reactor to speculate much about that. It’s possible that the government has overhead photos of the test or the recovery, perhaps alerted by someone in Russia who knew the schedules.

Background on the story.

Photo: Submarine reactors stored in canisters at the Saida Bay facility, where the barges are being taken. (Thomas Nilsen)

END_OF_DOCUMENT_TOKEN_TO_BE_REPLACED

The purpose of counterintelligence is to thwart the activity of other countries’ intelligence networks. The FBI gives a more expansive definition. For reasons I don’t fully understand, counterintelligence tends to be even more secretive than ordinary intelligence. It has also developed a mystique that may be keeping reporters from digging into questions that the American public needs to know the answers to. END_OF_DOCUMENT_TOKEN_TO_BE_REPLACED