R is the reproduction number, the number of cases that one case causes. R0 is the basic reproduction number, which is an idealization of how a disease spreads in a given population. Reff is a measured number for a particular situation. In looking at the models, I see R0 being used in ways that look like it contains other parameters as well. So I will just use R, which is the same as Reff. Using it without a subscript and the context will, I hope, indicate that it is totally situational.

The basic reproduction number can be taken to be inherent in a disease. Because populations differ, R0 is likely to show a range. A mathematical relationship can be derived between R and herd immunity. (Source of figure) 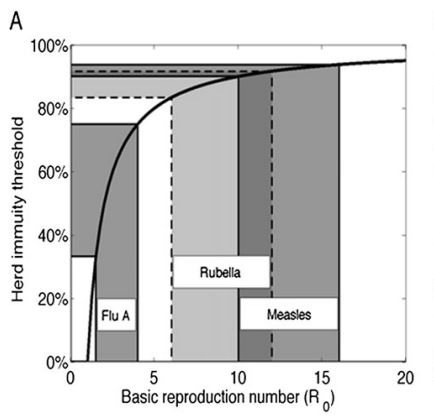 The point of social distancing is to decrease the number of interactions that can transfer the SARS-CoV-2 virus and cause disease. That brings down R. If R is less than 1, then the chain of transmission will die out. In that case, the herd immunity can be low. But we can’t do social distancing forever. It would be useful to understand how we might get to higher herd immunities.

One way is with a vaccine. A great many vaccines are being developed, and several have moved into clinical trials. The vaccines work in different ways, which is good for the potential of finding one or more that work. But 12 to 18 months is highly optimistic for having a vaccine widely available.

An article from the Los Alamos National Laboratory calculates that the R0 for Wuhan is 5.7, with a 95% confidence interval of 3.8–8.9. That’s higher than other estimates. From the figure above, that R requires 70-90% immunity for herd immunity.

Where is population immunity now? The best way to test for this would be serological testing, which looks for antibodies in the blood. There is still a lot we don’t know about how immunity to COVID-19 works, and there are individual studies that are being magnified out of proportion by reporters. So let me be careful in what I say.

Usually the human body makes antibodies to a disease as the disease progresses. Those antibodies continue in the blood and are effective for varying amounts of time. Antibodies to influenza last for about a year, which is part of the reason why a vaccination against the flu is necessary every year. There is still a lot we don’t know about antibodies to SARS-CoV-2. I’m not going to argue about individual papers, which must be put into a larger context by people who know a whole lot more about immunology than I do. For now, I’ll assume that COVID-19 produces antibodies, and those antibodies protect against the virus for more than a few months.

The question then is how many people have been infected. There is some evidence that people may be infected and suffer only minimal symptoms or be completely asymptomatic. The only way to determine immunity, then, is serological testing. A serological survey in Germany found that 14% of the people tested had antibodies to SARS-CoV-2. Here are a couple of threads on the study.

This type of study is exactly what we need to assess the current state of broad quarantine measures in the US: combined serological testing and PCR testing for #SARSCoV2 #HCoV19 #COVID19 #coronavirus https://t.co/vbpXTqrwaq

Preliminary results from German serological study of exactly the kind we need (N=509 so far) https://t.co/BOvAAugrEI reveals that 14% of sample had antibodies for COVID19 & an additional 2% had current infection. Death rate of 0.37% found (I'm not sure yet if this is IFR or CFR).

Another way to estimate population immunity is to look at the number of cases, minus the deaths. From the Johns Hopkins database on the afternoon of Friday, April 10,

It’s not possible to know the numbers of people infected, but if 15% of cases are confirmed, that would give 6.4% immune in New York City.

None of these percentages comes anywhere near what is required for herd immunity. This is why developing a vaccine is important.

It also raises serious questions about how to reopen the country. Both RNA and serological tests will be necessary to find who is infected and who is immune. South Korea has used detailed tracking by cellphone app to find who may have been exposed. We have some hard decisions ahead of us.

And a government study shows that if we reopen the country now, it will be almost as if we had done nothing.